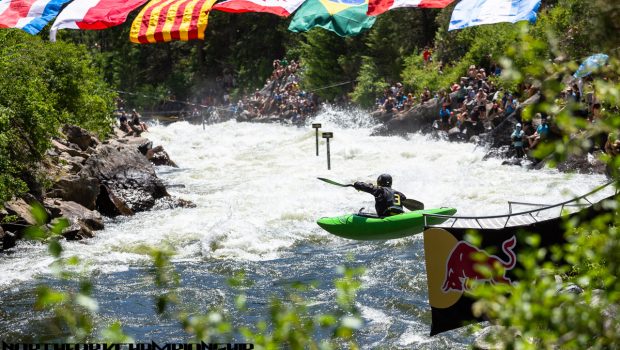 Bigger than the return of Friends, NFC is back! After a year off, the North Fork Championship, NFC is back in the game with new management in the drivers’ seat. We caught up with the Voorhees – Jody the mom, along with brothers Alec & Hayden who took over last year, the destiny of what some consider as the best X race in the world.

KS: Jody, Alec, Hayden. First off congrats & thanks guys.  Congrats on taking over the NFC leadership, and thanks for keeping the stoke alive and continue the legacy to allow X paddlers worldwide to compete on one of the best playgrounds. How do you feel four weeks away from the start of the event.

NFC: (Hayden) – Thanks Guys! We are excited for sure, and can definitely feel that it is just right around the corner! Things are coming along nicely right now and just getting all of the staff, volunteers, and vendors lined up. Just so many moving parts to get lined up and coordinate behind the scenes of everything. We also can’t wait to have the awesome community back in Idaho to enjoy our home and backyard. The competition is looking super stacked this year as well, so you can expect a super high level of paddling throughout the event.. as usual!

“One of our goals with the event was to make things seem like nothing really changed. .. If it isn’t broken, then don’t fix it, right?”

KS: Feed us on why you now find yourself in the drivers’ seat of the NFC.

NFC (Alec) – After NFC VIII and word had started to spread at the event that it was the last one, it had this weird almost mourning vibe trickling its way through the crowd. In addition to having a tough race with a shoulder injury a bit before the event, knowing that it was over was super hard I know for me personally. After the awards I went into my tent and was just so sad. We approached James and Regan after the event saying we didn’t want it to just end, and said we would be open to talking. About 4 months later after saying they were happy with it and didn’t want to pass it along, we met up and began the process to transfer ownership of the event and keep NFC alive. James and Regan will be at the event specifically to do a hand off year, so they will help set things up, show where things need to be and when etc.

KS: So Same program, same spirit?… or are you bringing your own touch?

NFC (Jody) – One of our goals with the event was to make things seem like nothing really changed. Yes, we are putting our own spin and touch on things, but the brand, atmosphere, and elite event that James and Regan built was very special and unique. If it isn’t broken, then don’t fix it, right? We are really just excited to continue to build and grow the event off of the platform they built, but also bring a new sense of fresh ideas and energy to NFC.

“We are obviously going to continue to remind everyone in attendance that Covid is still around and hasn’t vanished.”

KS: Covid Management. How will you deal with that? Are the paddlers requested to be vaccinated? Show a proof of not being virus carriers? Do you expect spectators?

NFC (Hayden) – We are obviously going to continue to remind everyone in attendance that Covid is still around and hasn’t vanished. Idaho has recently lifted restrictions on masks and gatherings, but businesses can leave it up to them with what they are requiring. In the U.S. and Idaho specifically, the vaccine is available to anyone over 12 years old, and out of state people can even receive it here. At this point, a huge chunk of paddlers and people in the community will be protected. Overall, the timing is shaping up pretty well in bringing this event back to a way that we can be safe, but also continue the event to feeling pretty much the same. Spectators are welcome, encouraging people to do what is safe for them, and still being mindful is what we will encourage throughout the event.

KS: Have the paddlers been responsive and sensitive to the formalization of the return of the race? How many paddlers do you expect?

NFC (Jody) – Even with some international borders being closed, we had a huge turnout in registration. 137 racers signed up, which is just short of the 154 that raced in 2019. We thought the event was too amazing to let go and would hurt the sport. The feedback that we have received has been nothing but positive and we appreciate the support from the community. Feeling that gratitude makes it all worth it, and our goal is to make it the highlight of everyone’s year, as it has been for our family for the last 10 years.

KS: Anything new to expect for paddlers and followers alike?

NFC (Alec ) – NFC is back to its more standard format. Thursday will continue with the Kokatat Qualifier, and one major change to the weekend is a switch to a new venue and event for Thursday night. The Whitewater Awards stayed with James, so we are excited to bring in the “NFC Film Fest” at Payette Brewing Company in Boise! The Egyptian Theater has been a great host for NFC, but due to some renovations, our amazing sponsor with Payette Brewing has an epic location for some great kayaking videos, a more social and free flowing atmosphere (vs the movie theater setting), raffles, and announcing the wildcard winners! Friday brings back the Boatercross on S-Turn and Whitewater Festival in Crouch, ID. The main event on Saturday will host 30 men (NFC VIII top 10 + 10 invites + the 10 wildcards) and 5 women (winner + 4 wildcards). Last Spring there was also an earthquake that hit right in Idaho, and caused a huge new rock to fall in right above Rock Drop. At the right flows, it creates one of the most glorious boofs in the world, and adds a higher degree of difficulty to one of the most infamous rapids out there. Excited to be in charge of the course this year and see everyone lay down some great paddling!

You may have missed